The feed F is the path velocity and represents the value of the geometric sum of the velocitycomponents of all axes involved. The dimension unit for the F word is determined by G functions:

G94 and G95 are used to define the feedrate unit, G94 is the default command, G95 is meaningful only when the spindle rotation.

Danger:    Since the unit of G94 and G95 is different, the F value may have a great difference. a new F value is needed when G94 instead of G95 was active, otherwise it would cause danger.

The programmed value of F must be greater than zero, otherwise an alarm is occured. If F value is not programmed in a program, F is considered as zero, axis will not move.

2. With activated G96 function, the spindle speed is adapted to the currently machined workpiece diameter (transverse axis) such that a programmed cutting rate S remains constant on the tool edge (spindle speed multiplied with the diameter = constant).

3. The S word is evaluated as the cutting rate as of the block with G96. G96 is modally effective until cancellation by another G function of the group (G94, G95, G97). 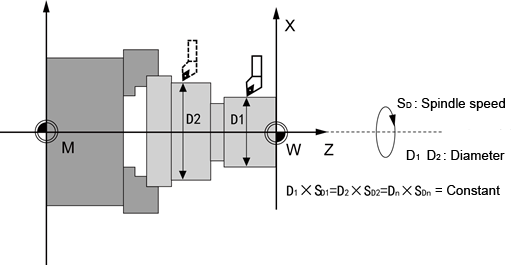 During machining from large to small diameters, the spindle speed can increase significantly. In this case, it is recommended the upper spindle speed limitation LIMS=... . LIMS is only effective with G96 and G97. LIM value is not permitted to go beyond the limitation set in machine data, when it is not set, the value is zero.

The function "Constant cutting rate" is deactivated by G97. If G97 is active, a programmed S word is given in RPM as the spindle speed .

2. When G00 instruction is active in G96 mode, the spindle speed will not be adapted to the X axis movement.

3. After M05/M19/SPOS instructions are programmed in G96 mode, when movement instruction is programmed, feed axs stop.

Get notified when new articles are added to the knowledgebase.